This page contains changes which are not marked for translation.
Other languages:
Deutsch • ‎English

As the name would imply, as with the kernel of a seed, the Linux kernel is the core of a Linux operating system. Every other element of a Linux-based operating system is built around the kernel, which acts as an interface between your computer's hardware and the applications that run on it. As hardware and software applications become more complex and sophisticated, so do the kernels to fully utilise them. As such, Linux kernels are continually under development, with new revisions and versions being regularly released. Further information on the very latest developments in kernel technology can be found at The Linux Kernel Archives

The first Linux kernel was originally developed by Linus Torvalds, the creator of Linux. It is now an open-source project containing millions of lines of code generated by thousands of programmers. However, Linus Torvalds still has the final authority on their development and release. 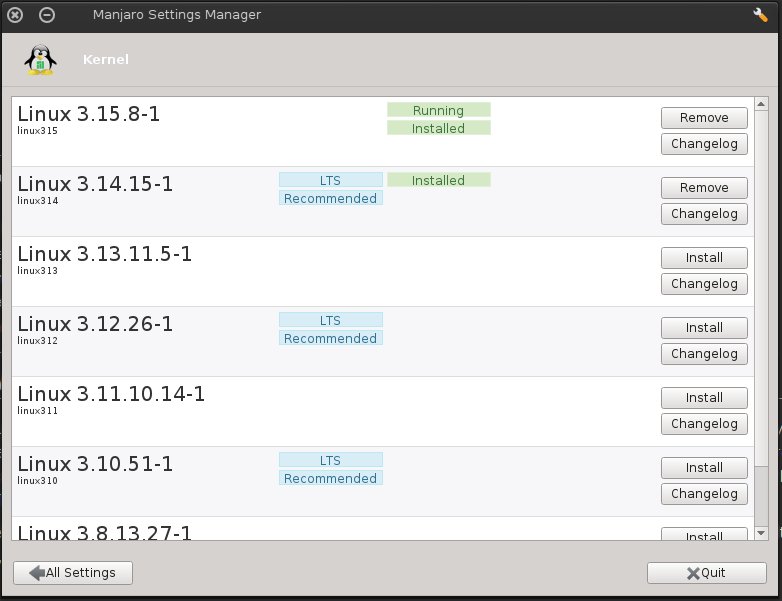 New kernels can be installed by pressing the "Install" button. All necessary kernel modules will be installed automatically with a new kernel as well.

Please consider the "Recommended" tag when choosing a kernel. LTS means Long Term Support, which is safest for most users. "What should I be aware of if I'm not on an LTS kernel?"

The newest installed Kernel will be booted by default, but to run other kernels that are installed, see Selecting Kernels section below.

Instead of using the Manjaro Settings Manager GUI to identify, choose, add, and remove kernels everything can be achieved from a terminal as well.

Identifying the Kernel Being Used

This terminal command will give your system's kernel information:

The above command not only shows which kernel is being used, it also lists any other kernels that are also installed, as shown in the following example Terminal output:

As seen in the above example, Manjaro is running kernel 5.0.17-1-MANJARO. The information given here is not arbitrary; each part of the kernel name identifies something about that kernel:

Manjaro not only supports the use of multiple kernels (selectable from the boot screen), but allows easy access to the very latest bleeding edge kernels as well. This is undertaken through use of Manjaro's own MHWD-kernel (Manjaro Hard-Ware Detection) command. The syntax of the command is as follows:

The optional rmc (remove current) component is of vital importance. Using this will result in your existing kernel being deleted upon the installation of the new kernel. Otherwise, if it is not used, then the existing kernel will be kept, and will be selectable alongside the new kernel at the boot screen. It is recommended - especially if updating to the latest bleeding edge kernel - to keep your old one, even if only for a short time afterwards. This the safer option, and the old kernel can be easily removed when satisfied with the stability and functionality of the new one.

As an example, once the terminal is opened, the following command will install a new kernel (4.19) without deleting the existing kernel currently being used:

Otherwise, the following command will install a new kernel (5.10) to replace the existing kernel, which will be deleted:

Either way, Manjaro will automatically configure the new kernel for you, ready for immediate use. Once completed, close the terminal and re-boot the system for the change to take effect.

WarningDO NOT attempt to delete an existing kernel while it is actually being used by Manjaro at the time. You can first identify what kernel is running on your system by using the command mhwd-kernel -li in the terminal (see above).

Where multiple kernels are present on your system, pacman can be used to remove them in the terminal. It may be necessary to delete a total of three elements of the kernel in total to completely remove it:

1. To remove a kernel use the following syntax: sudo mhwd-kernel -r linux[version]

2. To delete a kernel's headers, the syntax is:

For example, to delete the headers of kernel version 5.0.x from the system, the following command would be entered:

3. To delete a kernel's extra modules, the syntax is:

For example, to delete the extra modules of kernel version 5.0.x from the system, the following command would be entered:

4. To delete all elements of a kernel at the same time - where they are all present on your system - the syntax is:

For example, to completely remove all elements of kernel version 5.0.x, the following command would be entered:

Please note however, that attempting to delete multiple elements at once if they are not present on your system will result in an error message before the operation itself is aborted. It is also worthwhile noting if Manjaro is being run in a virtual machine (e.g. Oracle Virtualbox), you may not be able to delete certain kernels if they contain elements important to the virtualisation process itself.

As with most Linux commands that can be entered into the Terminal, typing the command followed by either -h or --help will print out the usage & available options to the Terminal for your reference. Here is the output of the mhwd-kernel -h command: 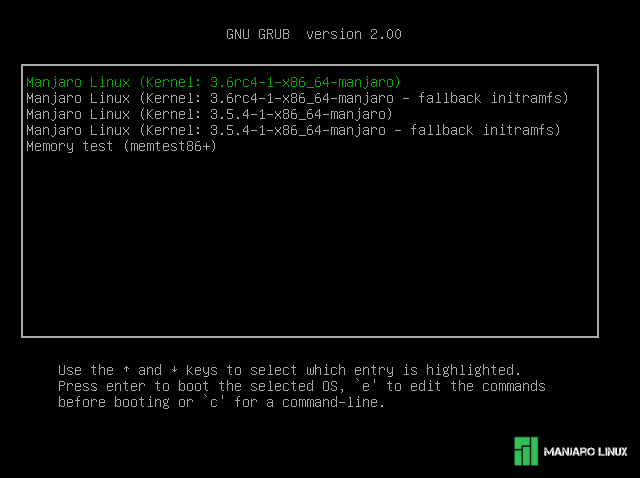 All available kernels installed on your system will be presented upon booting up. GNU GRUB is visible with a couple of options. Choose "Advanced Options for Manjaro Linux" by using the arrow keys ↑ ↓ on your keyboard and then ↵ Enter.

On the next screen (as illustrated) are backup copies of each kernel version installed (which will also be automatically removed if or when a kernel version is deleted). To select a kernel, simply use the arrow keys ↑ ↓ to highlight the desired version, and then press ↵ Enter.

Tip In case you have hidden your grub menu, you can just press Esc during boot to show it and make your changes
Retrieved from "https://wiki.manjaro.org/index.php?title=Manjaro_Kernels&oldid=32932"
Categories:
Cookies help us deliver our services. By using our services, you agree to our use of cookies.